Remember your childhood when you got a present from the Christmas Man, from Santa Claus? I guess you do, but do you still get it? Well, check out Belarus! In this country, the people don’t just celebrate Christmas once, but two times! 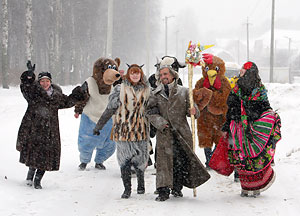 How is that possible?

In most parts of the world, people live in accordance with the Gregorian calendar. However, the Orthodox Church adheres still to an older one, the Julian calendar, and herein lies the reason that there’s a 13-day delay in celebrating all holidays.

In Belarus, most people are Orthodox Christians though there’s also a significant share of Protestants and Roman Catholics. In Belarus, key religious holidays such as Easter and Christmas are designated non-working days in official calendars and the people have the liberty to choose which day they choose for their celebration.

The Belarussian ritual of Christmas is closely connected with Kalyday, the famous folk holiday, where people not only go to church but also observe various rituals of pagan origin, and both traditions were fused into one single fest.

Well, I’m telling you that, even if you understand English Grammar Rules pretty well, understanding the Belarus language, the country’s rituals, traditions, language, history, religious beliefs, and festivities, may get pretty challenging, wouldn’t you agree?

In the contemporary Belarusian language, “Kaliady” describes and covers the entire Christmas celebrations period. “Kaliady” finds its origins in the Latin word of “Calendae”, in ancient Rome the name of every month’s first day, but the Belarusian Kaliady folk holiday has roots in pre-Christian times.

Belarusian Kaliady is closely related to the winter solstice as the days begin to grow longer and the people can look forward to the summer period. And because in Belarussian territories, the main religion became Christianity, the times of Kaliady were linked to the Christmas and Epiphany holidays

In pre-Christian times, the most important idea of Kalyady rituals precipitating the time of spring and ensuring through certain rituals, that the harvest would be rich. During Kalyady, in all families, three sacral suppers (“Kutsia”) should be served.

The first Kutsia is the ‘fasting’ ‘Lenten’ Kućcia and the third meal is the so-called ‘Hungry’ Kućcia. The Great Kutsia (the second) is celebrated on Christmas Eve, the evening before the big Christmas Day.

The table will be fully packed with 12 dishes including mushrooms, herrings and other fish, all sorts of pancakes, oatmeal kisel (desserts made of fruit such as berries and potato starch, and occasionally served with milk). Beneath the tablecloths, there are straws and all family members pick a straw to determine who will be the longest-living.

The dish that’s served last is the Kutsia or Kućcia itself. It is composed of porridge with poppy seeds, honey, raisins, and nuts. The masters of the house are the first ones to try this Kutsia. The tradition requires that, at all times, a spoonful of this traditional porridge had to be placed outside the house during the night. In ancient times this was an offering to Zuzia (God of Winter). 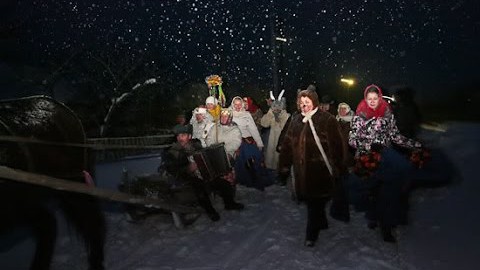 One of the most exciting and characteristic Belarussian Christmas traditions is Kalyadavanne when many groups of nicely dressed-up individuals stroll from door to door while singing Kaliady songs (called “kaliadki” or “shchadrouki”).

In this performance, the most important and characteristic personage is the person masked and dressed like a goat, the “Kaza”(goat). The masters of the house are supposed to present snacks, sweets, and sausages when they are paid a visit during Kalyadavanne.

The Rich Kutsia ( Kućcia), also referred to as Generous or Fat Kutsia) is served on New Year’s Eve. The table includes Kustia porridge with fried bacon and butter and a variety of meat dishes.

One more Lenten (the Hungry Kutsia) is served the night before Epiphany and that’s why it is also referred to as Water Kutsia.

Kaliady are used for fortune-telling as well, particularly by young women, eager to get married. These fortune-telling rituals are done in numerous ways. Let’s take a closer look:

On Kaliady’s first day, in the morning or evening, young girls go to a crossroad while binging a pancake piece or some “Kutsia” porridge. Then she will listen from what direction a dog barks, and subsequently, her husband-to-be should be taking her away from her home in that same direction.

Young women and men will then go outside and make a hogged fence while stretching out their arms as wide as possible. they can. Now, in case the number of hugged poles is an even number, that will means they will definitely be a couple the year after.

One more example: A young, married woman will hide a few items, for example, a ring, a needle, a brush, a piece of bread, or some other small thing, and then will ask her girlfriends, one after the other, to come over and find some items.

Because most Belarusians live in large cities, observing these rituals and traditions has become quite a challenge. But it was not only the phenomenon of urbanization that Christmas traditions were not preserved in many Belarusian families.

During the days of absolute Soviet rule, all religious holidays were eradicated in a rather fierce way. Churchgoing was strictly forbidden as were Kaliady rituals, festivities, and traditions, especially for younger Belarussians.

Soviet ideologists substituted Christmas with the New Year for celebrations and it wasn’t long before presents for children were no longer delivered by Saint Nicols (“Svyaty Mikalaj”) but by Daddy Frost (“Dzed Maroz”).

Just imagine yourself being a typical Belarusian family member that lives in a 2-room apartment in Minsk. On the last day of the year, December 31, your father will take a nap before starting out on an exhausting festive night as he knows that will involve lots of drinking and eating. Your mother isn’t allowed this privilege. She needs to do all the cooking. Just like on Christmas Eve, the traditional New Year’s Eve table must be full.

The most important (“sacred”) dish on New Year’s Eve is “Olivje” salad. This salad is a mix of potatoes, mayonnaise, pickles, green peas, and a few more ingredients. Don’t be misled by the “French-sounding” salad name. In France, the people never heard of anything like this. It’s the time that children are enjoying their winter holidays while eating tangerines and watching New Years’ movies.

Imagine further… The evening has come, and the entire table was set. Your mother is already pretty tired from cooking all day, your father is very hungry as he saved his appetite for the coming festive New Year’s Eve meal. Just imagine, the TV set will never be turned off.

This is the medium that leads the entire family through the festivities and celebrations, providing music, entertainment, and (of course) ideological sermons. Traditionally on New Year’s Eve, TV entertainment includes a never-ending range of stand-up comedians and sketches, pre-recorded shows, and re-runs of ancient Soviet-era comedy films.

Every year, the Soviet-era comedy “S Legkim Parom” is shown. This is an absolute “must”. You can translate the name as “have a light steam” a sort of saying referring to what people may tell each other after having taken a sauna.

The film dates back to the 70s and it is the story of a man who, after drinking too much vodka with his friends in the sauna, ends up in the city of Leningrad rather (instead of Moscow), in an oh-so typical Soviet flat that mistakenly thinks is his own. Then, the lady that lives there wants to kick him out. Well, as you may expect, in the end, she and the uninvited guest fall in love.

Then at 11 pm, the Russian New Year will come to Belarus. Moscow is one hour ahead of Minsk and most Belarussians receive Russian TV stations. Quite a few Belarussians will the speech by Putin which is preceding Kremlin clock chimes.

Then, of course, exactly one hour later, shortly before midnight, the oh-so-familiar face of Alyaksandr Lukashenka will appear on-screen, and this year, like all years, he’ll deliver his New Year’s speech to the nation. Every year, Lukashenka speaks so long that people get anxious that they’ll miss the long-awaited midnight hour, but, of course, this has never happened and will never happen because the speech is most probably pre-recorded.

Upon the arrival of the New Year, Belarussians fill their glasses with “Soviet Champagne” (one more relict of the old Soviet days) and attack all the food on the table. The children will take a run for the New Years’ Tree to find some beautiful presents. Eating goes fast and by 1.am, all stomachs will be completely filled. Still, many people still have found the strength to take a stroll downtown.

These New Year midnight walks are actually very much favored by the citizens of Minsk. The city’s main avenue closed for all transportation which allows huge crowds to stroll up and down the street while drinking beer and champagne from plastic glasses, listening to Belarusian music from loudspeakers, and waiting for miracles to happen.

Then, late after midnight, in the wee hours of the cold morning, they return to their homes tipsy, exhausted, and probably with shiny eyes and running noses. One person is happy; another one is sad, and again another one calls an uncle in some a faraway village… The Belarus New Year has started.