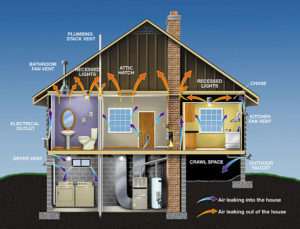 After a long winter of freezing temperatures and rising energy bills, the average homeowner will now be pleased they can finally turn down the dial and cut their energy consumption.

However, there is still likely to be the odd cooler day, and are we really prepared to go through the same thing when winter rolls around again sometime in mid-September?

In order to combat the rising energy prices, some homeowners have been doing everything they can to make their property more efficient and cut down on excess consumption.

As well as leaving them with some extra pounds in their pocket this will also help them do their bit for the environment and the summer seems the perfect time to compound those efforts and for others to follow in the same vein.

The Winds Of Change

In the wake of new environmental initiatives that have been brought by the government, there are now much more stringent rules and regulations involved in the construction and development of properties.

Not only do all new dwellings and those proposed to be expanded need to have an SAP calculation carried out in order to determine the property’s energy performance certificate (EPC), but there are also regulations to meet regarding airtightness and air leakage.

Air leakage testing is something that should be carried out during the construction of a property and will determine how well the building keeps the air inside and therefore how well it retains heat. There will always be space for some air to escape but this should ideally be kept to a minimum to decrease heat loss. Exact figures of 0.60 AC/H @ 50 Pascals of pressure have even been specified as a strict guideline.

Recently a couple living in Alaska, USA have been entered into the World Record Academy for having the tightest house in the world. That is to say that the owner and builder of the house, Dr. Tom Marsik, has managed to create a dwelling that has recorded ‘phenomenally low’ figures in terms of air leakage and airtightness.

The test used to determine this is known as a blower door test and blasts air into the building at 50 pascals of pressure whilst measuring the number of air changes per hour; hence the unit of measurement AC/H50. As stated before the standard set is 0.06 AC/H50 but this remarkable property tipped the scale at just 0.05 AC/H50.

Dr. Marsik, who unsurprisingly works at the University of Alaska as an assistant professor in sustainable energy, says that although these results have been created with a relatively small house (the home being only 600 square feet in size) it demonstrates that with acknowledgment of the importance of environmental issues it is possible to build truly energy-efficient homes.

Making your home as air-tight as possible is not the only way that you can increase its energy efficiency and the world record home in Alaska has many other features to increase its ability to be environmentally conscious.

Additional features include the fact that the home requires no conventional heating source (mainly because of its size), low flow plumbing fixtures, specially designed argon-filled energy-efficient windows, and the fact that it is entirely operated by electricity.

So how does your home compare to this ultimate energy-efficient role model? Are you really doing enough to acknowledge the effect that increased energy consumption and carbon emissions are having on the environment? Or is it time to upgrade your home to a greenhouse? Why not use this summer to prepare your property for the next grueling winter that we’re sure to endure.