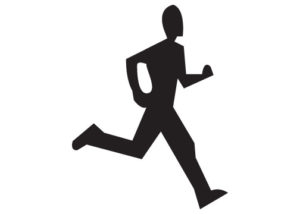 I am absolutely ecstatic to announce that my hiatus from running has finally ended, and although I’ve only got about 3.5 miles under my feet so far this week, the ankle feels good as new, and I’m ready to take on my own personal trail turkey trot tomorrow.

I know I have been pussy footing around getting back into running. Erring on the side of caution in order to push back my return to doing something I love so much, going mildly psychotic in the meanwhile,and growing more and more irritable as the days went by.

I have to be honest though… I probably could’ve started back a week earlier, but I was scared.

First of all, I only started running in April, so I know how bad it sucks when you first start running. At least for me it did. It’s uncomfortable, your lungs hurt, your legs hurt, your pride takes a beat down, it’s time consuming… Starting running and sticking to it takes balls.

Since I have been injured, I have been counting the days I’ve gone since running, knowing each one that passed would make my “comeback” that much more like starting all over again.

Yet when I started feeling better, I just tried to push back that first run even longer, because I knew how horrible it was going to be, and following the Paleo diet wasn’t all that easy as well.

On the other hand, my first half (where I injured myself) was my strongest run to date. Having to admit I wasn’t going to pick back up right where I left off was really hard on me. I knew I was going to be slower, but how much? Was my pride ready for that blow? Am I mentally strong enough now to push through and get back to where I was, or will I always feel like a has been? Would I even be able to run a mile without stopping?

Also, this run embodied so many “firsts” I felt anxious going into it. All the new variables had my head spinning. My first time post injury. My first time running in sub 30 degree weather. My first time running on snow, slush, and ice. Even though no matter where I went I would be within a reasonable distance from my house, I was uncertain of how to be physically prepared gear wise for this run.

Monday, I sucked it up and went for it. And it was surprisingly not terrible. I set my ISmoothRun Ap to track but not give me audio cues so I could just feel it out. The plan was 3-ish miles, just to test the water. I will admit, running in snow and on ice presents an entirely different challenge, especially uphill. I also wasn’t half as slow or uncomfortable as I thought I would be, but I definitely felt that 3.5 miles felt like a lot longer distance than what it usually does to me.

Still, this run brought back my confidence. It lit my fire once again. It allowed me to feel like I filled this huge void in my life that I’ve had for the past 20+ days. It feels amazing physically and mentally to be up and running again!
And even though my ultra plan only calls for 3 runs a week for the next month and a half, I am looking forward to every mile I can squeeze in.

So with that, I leave you with an optimistic outlook for the future. Ever prolonged something because fear and insecurity got the best of you? What made you snap?